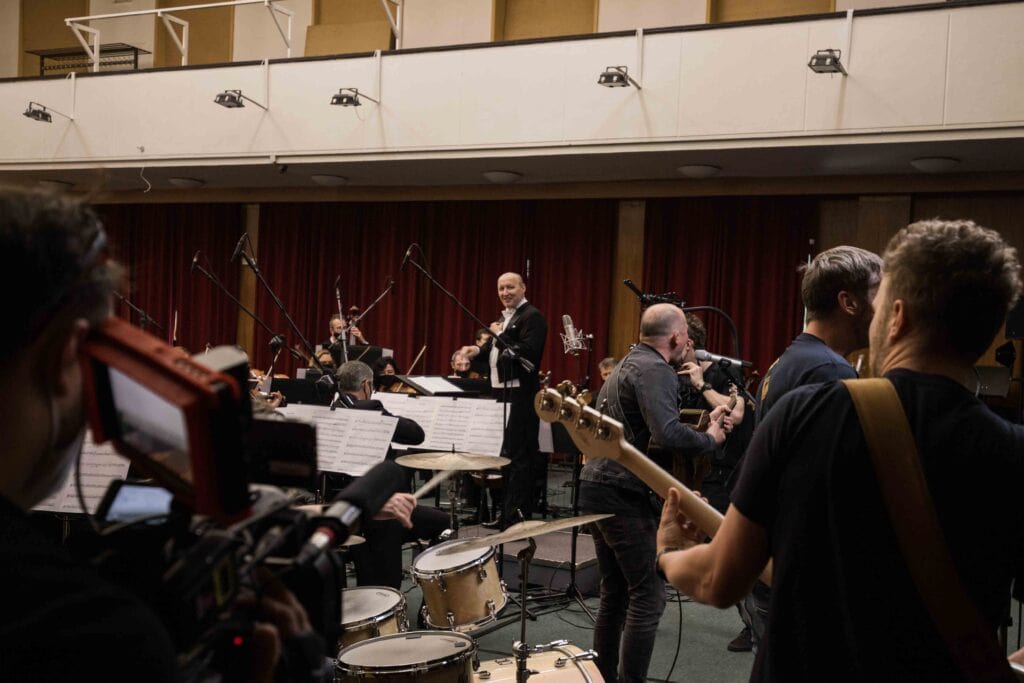 A new and improved Para anthem. This will be intense and not only as a sporting experience !!!

Today, the premises of the Ostrava House of Culture resounded with para ice hockey tones. Who wouldn’t remember the para ice hockey anthem, which drove ten thousand fans crazy two years ago. For this year’s 2021 WCh in para ice hockey in Ostrava the organizers are preparing one huge surprise. Janáček Philharmonic Orchestra’s violin, harp, oboe, or trumpets play a key role in it.

The original anthem was composed by Jiří Krhut, a well-known Ostrava musician and composer. For this year, however, this hit will have a completely different sound. More like a classical sound. The entire Janáček Philharmonic Orchestra took care of the new arrangement. “This is a very unique project for us. We are usually unable to carry out similar projects during normal situations, but this non-standard time allowed us to participate in this concept of music,“ Ondřej Daněk, the orchestra manager on behalf of the Janáček Philharmonic Orchestra, outlined. Jan Lstibůrek took on the challenge of this new arrangement. Known mainly for his collaboration with Tomáš Klus, he has had no previous experience with music for sports fans. “This song in itself carries a strong message in that it is an anthem reminding people of incredible experiences thanks to the stories of para ice hockey players. I perceive this very intensely, that all the necessary emotions need to be emphasized with the help of the orchestra, “said the anthem arranger Jan Lstibůrek, who also took over the musical direction of the entire recording today.

Strings and sticks in the lead role

There is also a video clip being made for the anthem, which was shot not only in the premises of the Janáček Philharmonic Orchestra in Ostrava but also on the ice, directly at one training session of the Czech para ice hockey team. This project was also a great challenge for filmmakers. “All the shooting days were connected with a beautiful collaboration and connection between the film crew and other parties. It took us two days to learn how to move on the ice as to not disturb the national team’s training and today we merged it with such a beautiful ensemble that is the Janáček Philharmonic Orchestra and there we learned to get the most out of their work for a change and not again not to disturb the musicians once again, ” added František eF. Horvát, the head of audiovisual project concept. We can already reveal that the stars of the upcoming video clip will be not only the musicians and the para ice hockey representation, but also Miroslav Hrbek and Tomáš Kvoch – two well-known para ice hockey veterans. The anthem’s creator Jiří Krhut is already looking forward to the complete anthem. ” The baseline was recorded by our best musicians from the bands Nedivoč and Bandjeez. When I heard it, I thought that it was great, but I think that completed with the Philharmonic Orchestra it will be one hundred percent better, ” Jiří Krhut promised.

The fans, however, will have to wait for the complete version of the para ice hockey anthem a little while longer. It will be ready in early June. But it already looks promising with strong emotions and a great experience. If you want a taste of the first tones from the new anthem, follow the social networks of Czech para ice hockey as well as the Janáček Philharmonic Orchestra in Ostrava.