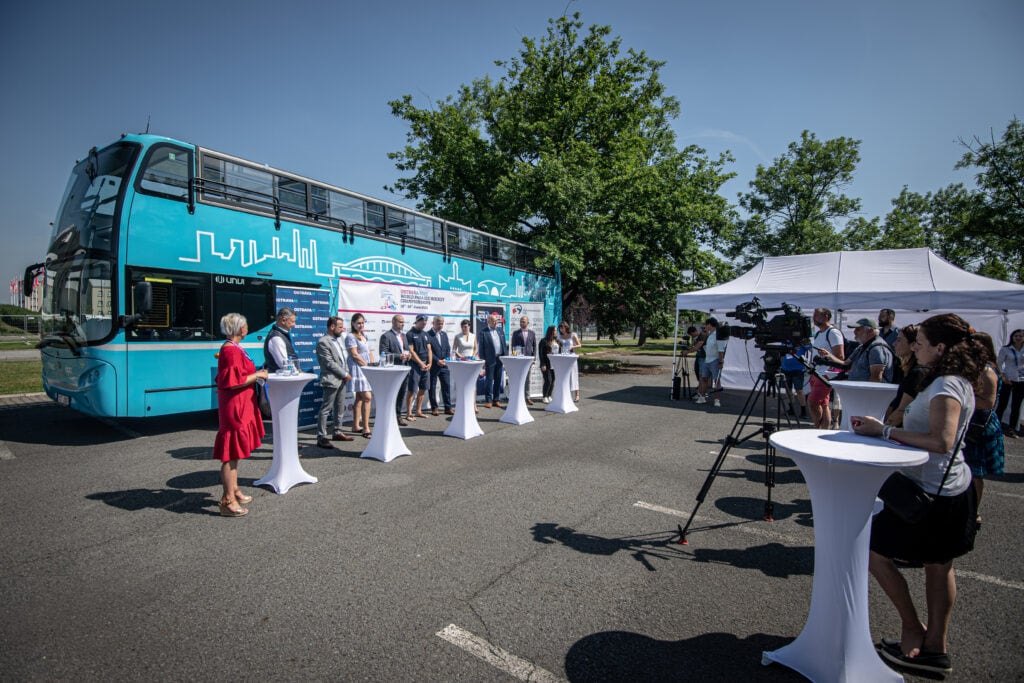 With spectators inside and out in front of the Ostravar Arena. The Ostrava 2021 World Para Ice Hockey Championships start this Saturday, and fans won’t miss it. They can cool off in these current summer temperatures, watching some of the best para ice hockey on the planet, or they can enjoy the sport a little differently. With music, a DJ, a cold drink and some fun activities and competitions in our outdoor Fanzone located in front of the arena.

The Para Ice Hockey Championships are back home in Ostrava. The players have a base ready, and the ice rink is prepared. Although the arena won’t be filled up to the last seat, as was the case in 2019, the organizers will be able to accommodate two and a half thousand spectators for each game, which is a relative success. Jiří Šindler, chairman of the Ostrava 2021 World Para Ice Hockey WCh, said: “We have put a lot of effort into the entire organization of the tournament in recent months, and we had to fight much uncertainty and constant changes. At the moment, we are grateful that we are able to organize the tournament at all. If everything goes smoothly, without complication, especially for the players, organizers and fans, we will consider that a success.” The international para ice hockey organization manager, which oversees the championships, also spoke about the safety of the entire tournament. “Ostrava is a part of the history of our sport, and we are delighted that we were able to have the 2021 World Para Ice Hockey Championships in Ostrava, i.e. the Moravian-Silesian region again. Obviously, we had to face different challenges than we did two years ago, but we are really excited to see the best players in the world come back onto the ice. I would like to thank the local organizing team as well as the city of Ostrava for welcoming us to this amazing event once again,” said Michelle LaFlamme, the World Para Ice Hockey manager. Then, at the press conference, Jiří Šindler thanked all the partners who supported the tournament in Ostrava even in these uncertain times. “The World Championships are returning to Ostrava after two years, making it the only city that hosted this event twice in a row. In addition, the tournament was successfully organized even in this challenging time marked by the covid-19 pandemic. I take this in recognition of the great work of the organizers and the fact that Ostrava can offer excellent facilities at top sporting events. I am glad that we can financially and organizationally support this elite world competition for physically impaired ice hockey players. I believe that they will show some great performances and that they will excite sports fans all over the world in the same way as they did two years ago, ” said the mayor of Ostrava, Tomáš Macura. The successful tournament is once again remembered not only by fans and players but also by partners who support the development of this sport. “Thanks to the mega-success of the 2019 championships, millions of sports fans are looking forward to this year’s championships. Thanks to television and online broadcasts, our region will once again become a little more known from other parts of the region and abroad. It would be great if the atmosphere of the championships and information about our region would attract travellers. Our region offers not only great sports and cultural events but also other unique experiences, “said Jan Krkoška, ​​Deputy Governor of the Moravian-Silesian Region for Tourism.

The Czech para ice hockey scene has experienced a boom in recent years. Thanks to the constant support of prominent partners, other new players can start playing this fantastic, dramatic and intense sport, which is also unique in the various life stories.” After the emotional year of 2019, the Para Ice Hockey Championships are deeply connected to Ostrava. We witnessed an exceptional sporting event that transcended the city’s borders, the region and the republic. That’s why we are happy that the championships are returning to Ostrava. We want to be there and establish long-term cooperation with Czech para ice hockey,” added Barbora Černá Dvořáková, Head of Communication and External Relations at LIBERTY Ostrava.

A new captain will lead the rejuvenated Czech national team

The eight best teams in the world are finishing their preparations before the tournament in Ostrava. The Czechs have a difficult group, and the games of group A promise a tough fight. Gradually, the home team will play against the teams of South Korea, the USA and Canada. “We feel good and are gradually getting into our game rhythm. The conditions for all teams have been just as difficult in the last year, but now we can finally meet on the ice again and compete with the best, ” said the coach of the Czech para ice hockey team Jiří Bříza. The Czech team brought several new players to Ostrava, who signed up for para ice hockey after the 2019 championships. For many, it will be the first comparison with other international players on the ice. The new national captain Pavel Kubeš will also lead the Czech national team into the championships.

Fans have a choice; they can cheer from anywhere in the world!

At home, at work, on vacation. Fans of the Ostrava 2021 World Para Ice Hockey Championships can watch the tournament non-stop thanks to the tournament’s own ParaHockeyTV and live broadcasts by Czech Television with commentary by Robert Záruba or as passionate bettors on the Tipsport website. Fans have countless opportunities to support para ice hockey players and different ways of cheering. “We put two and a half thousand tickets on sale for each match. We believe that in this tropical weather, para ice hockey will be the real, emotional refreshment, “said Jiří Šindler. From the first day of the tournament, the outdoor Fanzone will also be open to fans, which is being built right next to the Ostravar Arena in parking lot C. There, too, fans can support para ice hockey teams and cheer in front of LED screens. They can also try some of the most exciting para-sports. All this with refreshments, accompanied by moderators and a rich program for both big and small fans. “In Kaufland, actions are decisive, and we are a proud partner of the para ice hockey team. We are glad that we have also become an official partner of the World Championships. Throughout the championships, fans can also visit our Fanzone in front of the Ostravar Arena. We are keeping our fingers crossed for the Czech para ice hockey team, “said Martin Piterák, CEO of Kaufland.

The Ostrava 2021World Para Ice Hockey Championships begin on June 19, 2021. The home team will play the opening game, which will challenge the South Korean para ice hockey players. You can find the complete game plan on the website of the championships ms2021.parahockey.cz.