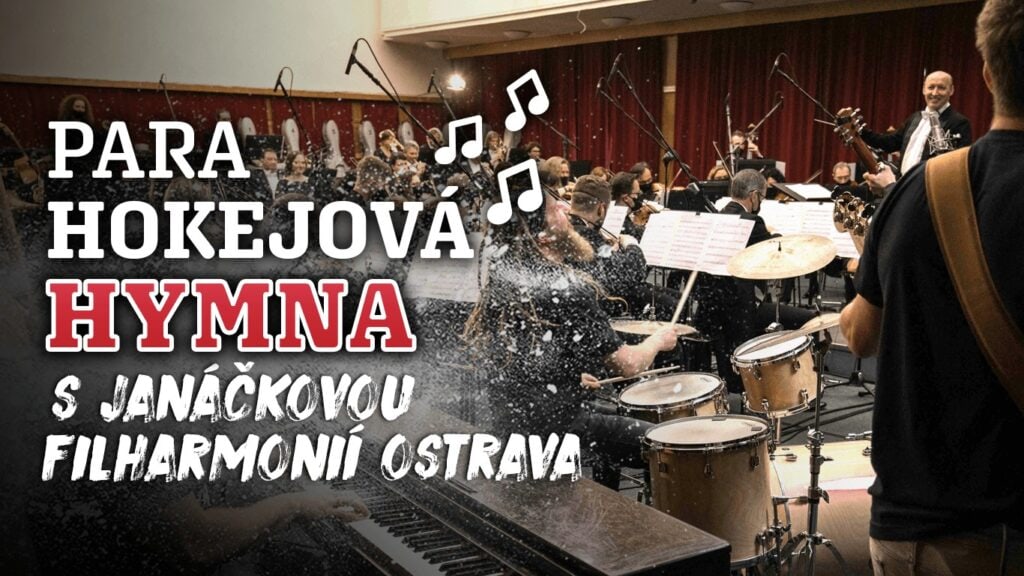 A tribute to the legends: The Para anthem with the Janáček Philharmonic has emotion, power and a message!

Miroslav Hrbek and Tomáš Kvoch are para ice hockey legends who have been dragging this sport to the top in our country for decades. They ended their active careers after the equally legendary world championships in 2019. With their sports performances and raw stories, they attracted other young players to para ice hockey. Miroslav Hrbek and Tomáš Kvoch handed over the imaginary scepter to a new generation of para ice hockey players in the Czech Republic. The Para anthem is a powerful story of two sports legends accompanied by the Janáček Philharmonic Ostrava. “The anthem was, is, and will be great. Just one of those songs that get under the skin and make their way to your heart. Everyone has to love it, ” said hockey veteran Miroslav Hrbek after shooting the video clip for the para anthem.

Paradoxically, it was the coronavirus pandemic that helped with creating the anthem. At the same time, however, it made the filming of the anthem very complicated. Jan Lstibůrek took the new arrangement of Jiří Krhut’s composition upon himself. And even though he was able to rework the music line for the Janáček Philharmonic Ostrava in record time – only a few weeks, the actual recording of the anthem was postponed repeatedly due to strict government measures.  Ondřej Daněk, the orchestra manager, revealed some behind-the-scenes details: ” That particular situation had postponed our recording four times and so the Para anthem became the record holder for the most postponed project of the Philharmonic. We were forced to change the venue of the filming and record it in several stages. “ Overall, more than forty Philharmonic members and an additional ten people from the Janáček Philharmonic Ostrava production were involved in the making of the Para anthem.

The video clip for the Para anthem wasn’t shot solely in Ostrava. Filming also took place in Poděbrady, the city where the Czech para ice hockey team regularly trains. The players of the representation – the main protagonists of the Para anthem – had two very unusual preparation days for the Ostrava 2021 WCh with the accompaniment of a film crew. “I think the hockey players had a very intense training session because of us. We kept wanting the same things from them repeatedly, and at the same time, we didn’t want to disrupt their training. But we had a huge ensemble of people both in front and behind the camera. So I am glad that we managed it all under those strict measures,” added František eF. Horvát, head of the audiovisual concept of the project.

And who can you look forward to seeing in the Para anthem video clip, besides the para hockey veterans? The leading role is played by the rookie of the para ice hockey national team Radek Zelinka, who will be accompanied by veteran Tomáš Kvoch. The coach of the Czech para ice hockey team, Jiří Bříza, took over the game baton, Stanislav Vavřínek, on the other hand, seized the Janáček Philharmonic Ostrava orchestra baton.  The original song was recorded by the song’s music and lyric author, Jiří Krhut with the help of some fantastic Ostrava musicians – Matěj Drabina, Vojtěch Šňupárek, Pavel Sotoňák and Janek Smichovič. Sváťa Tulej, another musician, was behind the demanding technical support of recording the musical background. Petr Januscka took over the script of the video clip for zeroin s.r.o; he also directed the filming. Many thanks also go to a master of sound Marek Hoblík and the Český rozhlas Ostrava radio.

The Para anthem is a tribute to all the people who were behind its creation and also a tribute to the fighters in the para ice hockey jerseys.